Home / Uncategorized / 3 wheels is harder than 2

Back in 2014 after joining the Paracycling team I starting seeing quite a few trikes on a weekly basis. It led me to ride around many a car park on Hannah Dines’ trike on two wheels, with the coaches saying ‘Oi! Get off that you’ll break it! It cost 5000 pounds!’

I never thought at the time it would one day lead me to think, I might have a go at a time trial record on one!

I spoke with Carl Saint a year or so ago about maybe borrowing his trike to have a crack at the 10 mile time trial record. He held the record from 2008 to 2012 when Barry Charlton took the record from him by 11 seconds to record 20.51.

Most time trial specialists all have at one point sat scanning through the Cycling Time Trials Handbook Competition Records list dreaming of one day having your name at the top of the list. I was having a look through one day and thought, surely it’s possible to get a trike to go faster than 21 minutes for 10miles, it’s an average speed of 28.6mph. Of course this is pretty fast to be going on a bicycle but to put it in to perspective, the record for a normal bicycle is now down to 16min 35sec, which is over 36mph average!

After deciding that maybe that record was beatable I spoke to Carl about using his trike in 2016 after riding the tandem on the A63 in Hull. He said there would be no issue and would be great to let someone else have a crack, also it was no longer his record!

Steve and I have ridden the 10 mile time trial on the A63 on May Day bank holiday for the last few years, it is a Tandem and Trike only event run by the Trike Association, but this year Steve was away in Scotland so couldn’t ride the event which made me think…. I wonder if I can get a trike to have a go at this trike record? I entered it. I didn’t have a trike at the time but if I didn’t enter it I couldn’t ride!

I spoke with Carl and he was riding on an event the day before but was happy to let me use his, I just thought one day to learn how to ride a trike and set it up would be pushing it! He put me in touch with a guy in Kings Lynn as his family are trike enthusiasts, Carl thought they’d be able to sort me out.

Marcus Hopkins agreed to let me use his trike and I arranged to collect it just 6 days before the race….. 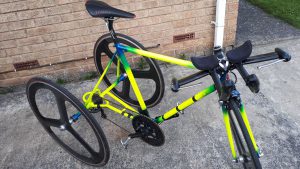 Here is the a photo of the trike after I spent a few days getting it how I wanted. I swapped the bars, put electric gears on and power cranks.

So it was happening. I had the trike and was entered in the race. All I had to do now is learn to ride a trike.

First day I went out and rode it for 20 miles. After about 5 miles I was happily riding along a straight road, next minute I was going towards the edge of the road, I panicked and leaned to try hold it on the road. Nothing happened. I ended up rolling in to the field. Luckily it was a soft landing and the bike and I was fine, I was just a bit shook up. So what had I learned, the camber will steer the bike and I HAVE TO TURN THE BARS!! Leaning alone does nothing…..

Rest of the ride wasn’t too eventful and I got home safely and it didn’t put me off.

The next day I did 30miles and didn’t end up in any fields and practised for a bit going round the streets near my dads. It wasn’t going too bad.

The day before the race, I went out for an hour again just to test out the bike, I’d put new tyres on and had to change the cassette due to a few issues with a Sram cassette. All was working fine and the confidence was high. It was a windy day and in the tail wind I got on the TT bars and it wound up to a speed of 33mph. It was still hard work even with a 25mph tailwind! I was still questioning a bit whether the record would be beatable or not. I came to a corner with a tailwind, nothing difficult about it on a normal bike, so I just went in to it at over 20mph lent over and the bike turned, just not enough, the steering went really heavy and I was 3/4 way around going towards the grass, I thought, oh no not again, I braked and went in to the grass. I stayed on and managed to stop. I rode back on to the road and realised maybe my confidence was a bit high for my trike riding skills.

I worried about the first corner on the course. It is a left hand turn which drops down the slip road on the to A63, it’s a 35-40mph decent on a normal bike. I just thought I better take that steady just in case.

I checked the forecast and started to now worry about the 80% chance of rain at 8am, the time I was due to race! The forecast was an East wind around 10mph and 10 degrees. I thought as long as its not rained off it’s looking good.

The course runs mostly SE / SW and an extra half a mile going West at the end which would be a tail wind. East wind on the A63 course is perfect, and it rarely happens. 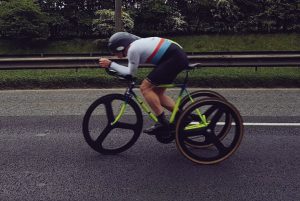 The morning came and I checked the forecast again, no rain forecast now! I was happy! I felt sick knowing I’m going to race so early and I was going to have to go hard to beat this record.

The start time came round and I was sat on the start line, worrying a bit about the first corner. I got pushed off and turned on to the slip road. I definitely backed off a bit but really there was no need, the corner wasn’t even that noticeable on a trike. I never have my speed showing on my Garmin. I rode to power and was catching rider after rider although it didn’t feel very quick. I got to the turn and realised I had averaged just under 30mph, this was the headwind part. The slip road up to the roundabout was hard. I was down to 16mph as I hit the roundabout and even pedalled part of the way round them! 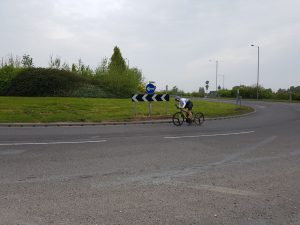 I looked down at 5miles, this is after the turn and I was about 30sec slower than 30mph average. I then knew the record was on. I had to average 29mph to beat the record and I had a tail wind for the return leg. There was very little traffic but the wind was good and I got a few lorries help me on the way back.

I really had no idea how fast I was going, I was sat in 60 x 11 most the way back just concentrating on holding the power. I was breathing as hard as I could and the pain was setting in on the drag on the way back.

I was glad to see the last half a mile, I dropped down the little hill towards the finish and realised I was going to break 20 mins, 30mph average! I was pretty shocked but it drove me to try as hard as I could for the last part, I found out later the last 30 seconds I’d averaged over 500 watts, and averaged 33mph for the last 5miles!!

I pressed the lap button on the Garmin. 19min 28sec. I was shocked and happy! All that messing around during the week with the bike and riding in to a field was worth it! I’d done it. The official time was 19min 30sec which was 1min 21sec faster than the previous record!!!

If you ever think riding a trike is easy, it’s not. It’s really hard work, you steer on the straights and sometimes turn the opposite way to go round a corner; if the camber requires…. It’s strange and definitely not like a normal bike. I don’t recommend going out and buying one, unless you’re happy to have far more crashes than you already do and go a lot slower! Thanks to Marcus Hopkins for lending me it, not sure I’ll use it again, but never say never.