I’m not really sure why I decided to set myself a new challenge, I’ve had a go at most things in road cycling, so I thought this year why not have a go at some longer distances…

I had a bit of help for Rio from a bike shop Vive le Velo in N. Ferriby, Hull. I had a great laugh with Ed in the shop and he was really happy when we came back from Rio with a handful of medals. I thought maybe he’d be up for helping me out this year with some personal goals, I asked and he has been brilliant! 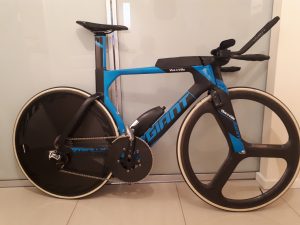 I kept my form from Rio pretty well by training in Mallorca twice over the winter and did some long rides to keep the fitness. I didn’t really think about long distance races whilst training, I just liked riding my bike in the sun and seeing the views.

The time trial season came around and I started entering a few events and realised I was going as well as ever, winning all my opening tt’s by over one mph. I did however always say….I’ll never do a 12 hour time trial in the past, but at the start of this year I said I might have a go and see how I get on over a 100 and 50 mile. If they’re any good I’ll do a 12 hour if I have a chance at the British Best All Rounder competition. This is a national time trial competition that’s been going since 1944 and I remember a lot of people in the clubs talking about it from when I was very young! However, this was always something I didn’t think I’d attempt!

I looked through the calendar and picked out 50’s and 100’s that I had to do to have a chance at getting some fast times, all fitting in around my tandem piloting duties. I realised I possibly wouldn’t get in the fast 100 mile on the A11 in Norfolk without riding another one first, as the races only have a limited number of places and are filled with faster riders first. I thought I’ll just ride the Anfield 100 the day after the Leicester 50 mile TT just so I had a 100 mile time to enter a faster one.

Yes… I thought this was a mad thing to do too. I went to the 50 and felt pretty good. The course was brand new, the day before Bigham had done an 18 min 10 mile ride, so it looked like it may be quite a good course.

I had a tail wind and mostly downhill on the way out and went through 25 mile in 45.45 and caught the guy that set off 5 minutes in front of me at around 27 mile. He’d averaged about 30 mph and must have had a shock when I went past! I got cramp on the run to the finish but got to the end with the fastest 50 of the year so far.

I got my stuff together and drove to Shrewsbury. It was a few hours drive. Had some food and went to sleep, not much though as I was up before 5am! It was raining. Pretty grim. I put my stuff on and just rode to the start and got there with around 1 minute to spare!

I set off steady as it was my first 100 and I’d worked out roughly what power I could average for 100 miles, so just stuck to that. I passed rider after rider. I thought, have I gone too hard? I kept going and going. The rain was on and off for most the race. I was glad of it really as it kept me cool.

I got to the last hour and felt fine really. People were clapping and encouraging me as I went round which is something you don’t really get at the shorter events.

I got to the end and realised I’d gone pretty quick!! I ended up with an iconic win in an event that has been running nearly 100 years, taking the event and course record! This made me think… maybe I’m not actually that bad at this long distance stuff!

A few weeks later I got in the fast event on the A11 because of the time from the Anfield race. The morning came and the weather was perfect. At 6am it was already 18 degrees and very little wind really. I said to a mate before the start, the competition record will go today… I just hope if I break it, mine’s the fastest!

I again tried sticking to my power I did in the Anfield race. I got excited and didn’t really stick to it that well. I went through 10 miles in 18min 50. My coach that was helping me out on the day shouted to me I was going too hard! I backed off slightly, but I passed riders one by one. 50miles went by in 1hr 37min. I got to 70 miles without slowing down but it then caught up on me. The weather was getting hotter and the sun was beating down. I blew up. My power dropped nearly 50w, over 15% and I was struggling. Only and hour to go and just I dug in.

I’d been having issues with my chain coming off and this event was no different. I’d put on a chain catcher I’d made but it actually ended up making things worse. I got to just 5 miles to go and nearly caught my 10 minute man, my chain jumped off and pushed the chain catcher out of the way and it was hard to get my chain back on, I lost about 20 second in the process. I never did catch the man in front. I got to the line and finished with 3hr 16min 51sec which was 5min quicker than the national record! 4 other riders also broke the record on the day, I finished 2 minutes ahead of 2nd place.

This really had set me up well for the British Best All Rounder competition and meant I really had to at least attempt a 12 hour… the joy.

So plan now was to find a 12 hour I could fit in. I did a bit of research on the courses and where most people did fast times. I figured since the record was set in the Breckland event I would ride that. The Newbury one was earlier but it was only two weeks away so I decided against that.

I got ill 3 weeks before the Breckland. I missed loads of training due to it and I attempted the National 100 mile Time Trial and I lasted till around 50 miles before my illness just got the better of me and at 70 miles I’d given up and got off. I wasn’t sure how I’d recover to ride the 12 hour.

I had the BDCA 50 mile TT on a really quick course the following week, I wasn’t going to go as I was still ill the day before. On the day I decided I had nothing better to do and went anyway! I was glad I did as the time I did made me the 7th fastest person ever, and 2nd fastest this year due to someone going faster in a separate event the same day.

Breckland came round and I still had lingering illness and had to visit a doctor only 2 days before! Not ideal but I was feeling a lot better after my sinuses stopped hurting so much!

A 12 hour is daunting. I really don’t know why people do these every year. You get on your TT bike in a cramped up position with your head pushed up somewhere between your shoulder blades and ride 12 hours. I got on my bike at 6.35am and rode. The start of the circuit is fairly average, mostly newly chipped roads and a rough in parts. Then you get to the rolling road of the A11.
I had an idea of the power I needed to average. Once I’d set off I started looking at this, and quickly just ignored it as I was going too slowly!

I thought my power calculations must be wrong. 50 miles in, it was still a bit damp, and I’d picked up a slow puncture in the rear wheel, I managed to nurse it to where my dad was stood to get a wheel after riding it soft for 9 miles and lost 50 seconds. I then stuck at my gauged effort for hour after hour. I went through 200 miles in 7hrs 19. This was well up on the record speed for 12 hours but I knew the hard bit at the end would soon zap away any gains I made on the dual carriageway. 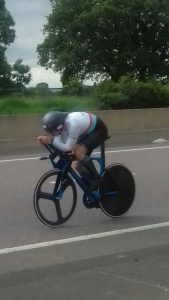 The 2nd loop came, the turn road surface was rough. Very rough. I tried to avoid it by riding to the left of the white line where cars don’t drive, it had quite a few bits of gravel and stones but was far smoother, I hit a big stone coming back out just before the sliproad and the front tyre blew out. I struggled up the slip road on the rim and got a wheel from someone else’s helper at the turn. The wheel was far narrower than my wheel and I couldn’t get the brake to touch, but I had no choice to use it. I rode to where I next saw my dad a few miles later and stopped on my cleat!! In total that one puncture cost me 3 minutes with the two stops.

This wasn’t long before we got on to the finishing circuit. 280 miles had past. 130 miles further than I’ve ever ridden in one day before! I rode on the rough chipped roads to the finishing loop. I was really starting to suffer. I’d gone through about 20 gels and 15 bottles but the length of effort had drained me. Then at 11hrs my computer battery stopped.

I didn’t know how long I had left or if the record was still on. I just kept going. I knew I was going to go over 310 miles which in my head was my realistic aim. I had my helpers shouting to keep going and they were cheering. I even saw the current record holder, Andy Wilkinson, cheering me on which was nice!

I didn’t really know what happened when you reached 12 hours, but I could see what numbers were still riding so I had a rough idea how long was left. I got a shout saying 9min to go from my coach and I kept pressing. My dad shouted 2min left! I kept going and shouted to a time keeper as I passed 2 miles later, he just waved to say that’s it.

I had literally no idea what distance I’d done.

I got off the bike, I couldn’t walk and barely stand. My neck was agony.

I got back to the HQ after a lift and walked badly in to the HQ to be told I had missed the record by just 0.7 miles! This is about 2-3min in riding time. The risky riding in the gutter to avoid the awful road surface had in reality backfired and cost me the record. I was happy but a bit disappointed. The official distance has now been calculated and was 317.343 miles.

Andy Wilkinson’s wife Jill was also close to the women’s record, missing it by just 4 miles, the record has stood since 1967 when Beryl Burton beat all the men in the event and also beat the men’s record at the time with 277 miles.

I said I will never do a 12 hour again, but now my knees and back have recovered I’m wondering if I should!

I won’t find out if all my efforts at the longer distances have been worth it to win the BBAR until all the BBAR counting events are completed, but as it stands today I am leading it overall with a record calculated speed 29.356 mph, so I’ll keep my fingers crossed it’s good enough!