After our success in Rio 2016 we were told last year Rio would host the 2018 Paracycling World Track Championships. I wasn’t all that enthusiastic to return to Rio if truth be told, 12 hours of flying and about a day of travelling in both directions wasn’t something I was looking forward to!!

We decided last year that we would do our own thing a bit more and only target the Para Time Trial World Champs in South Africa. We got ourselves selected and were going really well, it ended in big disappointment due to issues with our bike, we ended up missing the gold by 3 seconds after not having our chain on the bike for 30 seconds!! 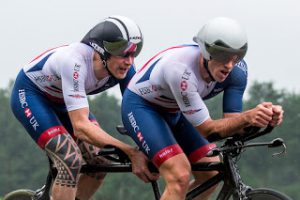 This disappointment meant we really wanted a world title in the Rio Para World Track Champs in 2018 more than ever!

We had been training a few times a week on Manchester and I wouldn’t say it had been going all that smoothly due to illness through the winter. Manchester track felt hard work, we wasn’t hitting the splits we had hoped for, although we had a few positive sessions.

Once we flew out to Rio it was really odd been back, only 18 months ago since the games. Memories were good and we stayed just across the road from the village, just a few hundred meters from the Velodrome.

First session on the track was amazing, I couldn’t believe how fast it felt, the surface is so smooth in comparison to the tired boards of Manchester. We had heard stories of track damage caused by a fire on the roof of the velodrome, so wasn’t sure what to expect; the damage had all been fixed and the whole banking at one end had been replaced. Riding it you couldn’t tell where it had been joined, made Manchester’s track feel like a gravel track!

In training, we were rolling round in times surprisingly comparable to before the games. Confidence was high and we had a strong feeling this could be our first world title!

The day came around and we got our start heat, we were up against the Malaysians in qualifying in the final heat. They were last off as they rode in a race in Malaysia recently which meant they had the most world points of any nation, so were seeded in the final heat!
It was not great news for us as we knew we would have to pass them more than once.

On the day we warmed up and watched the heats pass by, the Dutch tandem did 4.12 and then the Spanish finished with 4.11…. the pressure was on! We always prepare ourselves mentally for bikes before us qualifying fast, so we didn’t let it get to us too much and stuck to our plan.

We set off strong holding our splits, after less than 1 kilometre we caught the Malaysians, luckily catching them on a straight and not losing too much time, then we caught them again, and again! The splits dropped and I thought we might end up qualifying 3rd whilst riding round. We crossed the line and finished just 0.3 seconds slower than the Spanish.

I don’t think we were that happy with our 4.11.3 time, we knew we had lost time passing the Malaysian tandem, but it was a gold ride off and we knew we had given ourselves a chance to win. 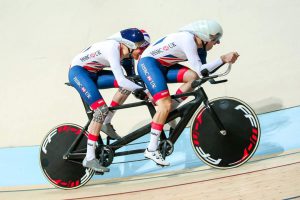 Just 4 hours later we did the final. We stuck to the plan, rode to our splits, the Spanish were up by well over a second as I looked across after 6-7 laps. I honestly thought, I can’t bring that time back if they don’t drop off, legs felt tired from the qualifying and I was already breathing hard! Around 5 laps to go I thought the only way we are going to win is lift the pace now, our splits had already started to drop, I pushed on and I was hurting a lot! I was even struggling to steer by now, 3 laps to go I looked across again and somehow, we were ahead!!

One last push and I knew we would win! It is a strange feeling rolling round with only a few laps to go knowing you’ve won a World Championship! The gap was big enough by then to know it wasn’t possible for the other team to bring it back. I knew Steve was also giving it everything too, it is just hard to tell what the other person is feeling like on a tandem when you’re in so much pain!

We were now World Champions!

I believe this was the most successful GB Para World Championships ever for the team! 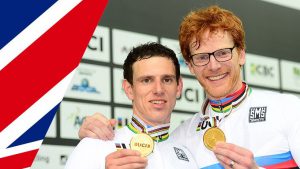 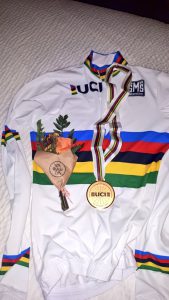