Adam Duggleby is an British cycling rider who since 2014 has been competing at international level as a Paracycling tandem pilot for Steve Bate. Adam also coaches a number of riders and runs a cycling team ADDFORM – Vive le Velo.

Steve’s eye condition requires an able body cyclist to ride with him on a tandem bicycle in order for him to compete. Adam’s impressive solo results, along with his interest in being a pilot, led him to be paired with Steve in January 2014 and they have been more successful than they could ever have imagined.

They won a handful of international medals before competing in the Rio 2016 Paralympic games, where they won the Pursuit with a World Record. They went on to win the Time Trial and also won bronze in the Road Race. In 2017 Adam and Steve were both awarded an MBE for their Services to Cycling in the New Years Honours list.
In 2018 they became World Champions for the first time winning gold in the pursuit at the Paracycling Track World Championships, which was back in Rio, later that year they also became World Time Trial Champions!

In 2021 they became World Time Trial Champions in Portugal before competed at the Tokyo Paralympics were they claimed a silver medal in the 4km Individual Pursuit and a new personal best. Unfortunately they had an incident in the Time Trial, which ended their Tokyo campaign due to injuries sustained. 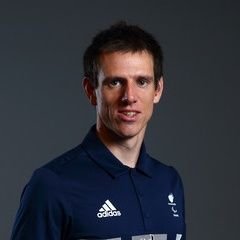 @a_duggleby
Recent tweets
RT @BritishCycling: Our final jersey of an EPIC Saturday morning session belongs to Chris McDonald and @a_duggleby. National Champions in…
21:39 - 28 Jan 2023
RT @cathsbruv: Anyone want a free entry to London-Brighton in June? I’ve paid but am double booked with the Test Match the same day #cyclin…
21:21 - 18 Jan 2023
@Justinthejock @NaughtyDrivers Can I ask why you have such a bee in your bonnet about cyclists and number plates? H… https://t.co/qYtdWoQWrd
08:51 - 16 Jan 2023
@crabbycabby84 @MikeyCycling Funny you see drivers doing all those things even though they have reg plates and they… https://t.co/XMGFzesd0F
21:39 - 15 Jan 2023
@MikeyCycling @AramLeeds @Brazelephantman I just feel texting and holding your phone driving along looking at your… https://t.co/ga7GQ4splP
10:09 - 15 Jan 2023
TOP