The truth of the matter is, I wasn’t going to even ride the National 12hr.
Last year I said the Breckland 12hr I did to go towards the British Best All-Rounder competition, would be the only 12hr I would ever do.

I made the decision fairly late to enter the 12hr, as I’d heard Marcin Bialoblocki was to ride all National CTT events from 10-100miles. My goal for this year, aside from my Tandem duties, was to medal in the 50 or 100 mile TT, so which meant in my eyes, the only way I had a chance to win a National CTT title would be to enter the 12hrs!

What a great decision it turned out to be!

I do love riding my bike, I think I enjoy doing a long road ride around the lanes more than just doing shorter rides with efforts.
I will happily go out and ride 6 hours plus, and have done recently around the Lincolnshire Wolds, East Yorkshire and through the Yorkshire Dales on a number of occasions!
I think my mentality to just be happy to go out and do these long rides alone, has given me a really good endurance fitness base; it’s made me be able to ride for 12hrs straight with no cramp or other issues! 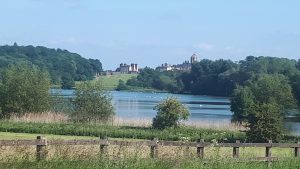 People who I meet often believe they couldn’t do a 12hr time trial, I think this is untrue for anyone, it is all down to how much time you are willing to put towards training to be able to condition your body to be able to cope with it. There is no magic or bit of equipment that is going to make you able to ride for that long, it’s training and hard graft that’ll allow you to do it!

I did however know from the start winning this race wasn’t going to be a given. I knew that there would be some unbelievable established long-distance athletes riding along with Kieron Davies who was riding this as his first 12hr, after winning the National 100 mile last year.

I got down to the HQ quite late got set up filled my bottles and got myself to the start line.

I’d decided after last year I was going to ride the whole race with only speed, time and distance showing. Power last year just didn’t help me, I didn’t know what power I could realistically hold for 12hrs so thought it just wasn’t useful.

I ignored everyone else racing and just got on with my own race to start with. I was just making sure I fuelled right, this is one of the most important parts of long distance riding, if you see a guy out on the club run every week getting round an 80 mile ride on one bottle, don’t follow that example if you want to do well in a long-distance race. Past 100 miles you will suffer, it will all go horribly wrong very quickly without continually drinking and having other nutrition, such as bars or gels, or in my case jelly babies and jam sandwiches as well! 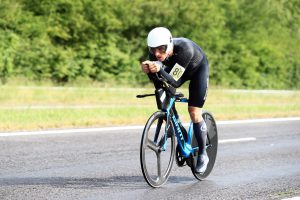 I only really started to wonder how I was doing overall when I got a slow puncture. The front tyre went down and I got a spare, it wasn’t my first choice, a Corima 4 spoke, but my dad got it out and I didn’t have time for him to find another wheel so just took it and got on with it!

I did start to work out in my head whether stopping to change it back to a HED GT3 or 90mm deep was worth it, I thought maybe at 130miles to the finish I may save a maximum of 1min in time, but then was that realistic, or outweighed by the time having to stop again? I decided not to stop in the end.

I didn’t know how much time I was ahead or who was even in 2nd place till about 7hrs or so in to the ride. The lap before I reached the finishing circuit I was slowing a bit and timed myself from Kieron Davies and from this I knew I was up roughly 6min or so. The middle of the day was quite windy, zooming along at 30-35mph for the majority of the tail wind and as slow as 16mph in places in the head wind!

I just got a load of gels and drink to try perk myself up a bit. I seemed a lot better after a caffeine gel but might have been a coincidence!

By the time 2hrs to go came around I was toing and froing time from Kieron and I was still fairly confident I was holding the time enough not to worry too much.
I had seen Richard Bideau sat in the grass during my ride so I knew he wasn’t going to continue and also Andy Jackson got off too who were real threats for medals pre-race.

At 1hr to go for myself I could tell Kieron had picked up his pace a bit, as he was finishing 25min earlier than me, so I tried to increase my pace too. The weather by the end definitely improved too, it seemed like both the headwind and tail wind were faster, no idea how that was possible but it was how it felt!

I had a great team to help me, they had all helped at my last 12hr too so had a good idea of what I would want. My dad and his partner along with my girlfriend and also 1998 National 12hr champion and good friend Eamonn Deane! It worked really well and feeding was spot on, apart from the odd bottle which was missed, which is always going to happen at some point.

I got to my last part of the race knowing at around 1hr to go it would be very unlikely that I would lose 5min in that time. I picked up my pace with 50min to go and actually felt fairly good surprisingly!

If you’ve never done a 12hr you won’t really consider the final part, when your time runs out you ride to the next time keeper after your time expires. Each riders 12hrs expires at different times as you start 1min apart. I don’t know how it worked in times before bike computers, but it seems now you have to know yourself when your time runs out, which is a bit odd as no one seems to tell you when to stop…

Eamonn and my Dad greeted me after the time keeper where I stopped. They were all really happy for me, Eamonn was so happy to be apart of it (I think) after he’d won it 20 years previous and my Dad was so proud to see me win my first Men’s CTT title!

My GPS computer said I covered exactly 322 miles at 12hrs but after working it out from the start sheet, the measurements add up to 321.525 up to that time keeper, so it might be a touch less than that in the end. The organisation are having some issues with working out the finalised results so nothing has been confirmed yet, but the 12hr record was 317.97 by the long-distance legend Andy Wilkinson from 2012. Kieron finished with around 319 miles and should be awarded the record as well, as he finished before me.

I’d like to thank Ed Neilson my sponsor from Vive le Velo too as he has sorted me out with all the equipment to help me get the results! He was also there riding for the first 6hrs before he got off and became another part of the support crew! Oh, and along with some banter as each of our team passed! He has decided to ride another 12hr to go towards the BBAR! The team should also get the team prize too for the National 12. 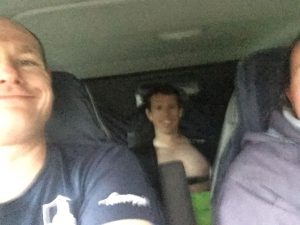 Long-distance riding is as much mental as physical, I think most people would consider anyone doing a 12hr mental…. I’d probably agree.

I’d also like to say how impressive Michael Broadwith was beating the Lands End to John O’Groats record this week, riding over 43 hours non-stop, going through some bad weather and finishing in a neck brace. That is a seriously impressive, but a slightly bonkers thing to do!!!